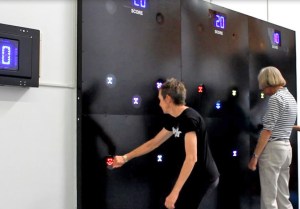 Train your brain while working out by turning neurons into superhighways.

Find Yourself in the NOW!

SMARTfit’s ‘Seize the Now’ programming provides the missing link by focusing on training the brain to function efficiently while concurrently placing a cardio, strength, motor, and skill demand on the body.

SMARTfit’s line of ‘Seize the Now’ training systems engages members of all ages in learning and exercise with captivating, interactive technology. SMARTfit’s powerful performance tracking and monitoring system is highly engaging and motivating. Exercise is fun for everyone regardless of age or ability.

SMARTfit sets the mental and physical conditions to function efficiently in the NOW!

SMARTfit is the training tool of the master instructor providing the ability to precisely tailor programming to suite the incremental steps of neuron growth, repair and strengthening. The result is a rapid way of turning neurons into superhighways where efficiency gives the perception of slow motion (often called “The Zone”).

Scientists have confirmed that the higher the level of engagement of the executive function of the brain, the faster neuroplasticity takes place.  SMARTfit excells with the use of timed and scored games that captivated desire to achieve and excel. Repeated play to achieve improved score rapidly drives mastery of skills and learning.

SMARTfit programming, embracing Hebbian Theory with technology and programming designed to simultaneously engage cognitive problem solving while requiring users to engage their whole body to deliver answers creates a training environment the is both invigorating and highly effective.

SMARTfit’s Apple/Android driven interface provides the tools to tailor activities to any ability level while supplying the data to measure and track progress. Players are motivated to keep returning to improve and track their progress